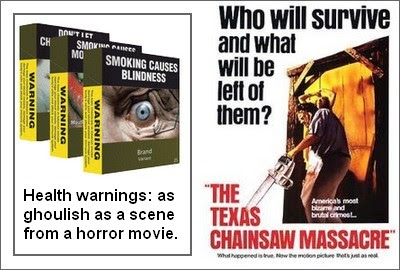 Anti-smoker zealots would have us believe that all tobacco control initiatives are about public health; if smokers can be coerced into quitting their filthy habit, then the cancer “epidemic” and dozens of other “tobacco related” diseases would simply disappear. But honesty and integrity are not characteristics I normally associate with the anti-smoker crowd.

The latest gambit in the campaign to force smokers to quit comes from the land down under.

It is believed that plain packaging will make cigarettes less attractive to young people, improve the effectiveness of health warnings and diminish the perception that some brands are ‘safer’ than others. According to the zealots, making the cigarette package as nondescript and unappealing as possible will reduce smoking uptake amongst children and young people. Uh-huh.

Of course, there’s no way the effectiveness of this, or any other single tobacco control initiative, can be evaluated. Have fewer kids taken up the smoking habit because cigarettes are hidden from view or because laws prohibiting sales of tobacco to minors, on the books in Canada for over a hundred years, are finally being enforced?

Do cigarette packages, adorned as they are with repulsive graphic health warnings, really encourage children and young people to start smoking just because a small portion of the package comes in a pretty shade of blue or a company logo?

British American Tobacco (BAT) has launched a court challenge to Australia’s plain packaging legislation. This angers the anti-smoker zealots who prefer the industry to roll over and play dead.

Australia’s Health Minister, Nicola Roxon, said in a statement: "Let there be no mistake, big tobacco is fighting against the government for one very simple reason - because it knows, as we do, that plain packaging will work.”

The simple truth is that neither she, nor her government, can possibly know any such thing.

Australia is the first jurisdiction in the world to contemplate such legislation, and that legislation is not scheduled to become effective for another year. So there is no precedent on which to base her claim that the government knows plain packaging will work.

But, despite the lack of evidence demonstrating any merit in such legislation, anti-smoker zealots are already pushing for similar laws in other jurisdictions, including Great Britain and Canada.

In Canada, cigarette advertising is conspicuous by its absence, cigarette displays are prohibited at point of sale and the sale of any tobacco products to minors is illegal. The elimination of company trademarks, logos or colour schemes is unlikely to make cigarettes any less appealing to children (or young people). Even adults don’t get to see the pack until after they’ve paid for them.

Of course, the kids might develop a nicotine “addiction” from the flavoured nicotine gum or lozenges which are sold over the counter with no age restrictions. But, that’s for another post.

And, it’s hard to see how plain packaging would make the graphic warnings on cigarette packs any more effective. They’re already as ghoulish and grotesque as a scene from The Texas Chainsaw Massacre or some other slasher flick.

And, the packs will still require a modifier indicating whether the contents are regular, light, extra light or menthol. Whether the smokes are marked Peter Jackson Lights, Peter Jackson Blue or Peter Jackson Number 2 will make little difference. The distinction between regular and light cigarettes will always be there because smokers want, and are entitled, to know what they’re buying. So, there is little to be accomplished on that front.

Plain packaging? Bullshit and bafflegab at its finest.
Posted by The Old Rambler at 1:26 AM

EXTREMELY glad to see you back Rambler! :) I figured you'd taken a summer vacation, but began wondering when it extended into December.

Hospital infections are the worst. They're the classic example of the BubbleBoy syndrome: everything is kept so sterile that the very few bugs that survive the regimen become superbugs with the world as their platter and no competition.

Australia's health minister is an idiot. Does she think for a single minute that the beer companies or the fast food industry wouldn't scream high holy murder if "plain packaging" of their goods and presentations were forced upon them? Picture driving down a highway lined with plain brown boxy structures labled "Burger Shack Brand X," "Burger Shack Brand Y," etc.

That sort of "plain packaging" would probably do even more good for health than the smoking one: after all, which industry uses TV to advertise Happy Burgers to the little kiddies and promises them toys if they tantrum until the parents give them what they want?

Keep on fightin' Rambler! We'll beat 'em in the end!

HI Rambler,
I just posted a comment on one of your previous articles about TSNAs. I then went looking for a way to contact you (email) and did not find one. Apparently you approve these posts before they can be viewed, so I decided to take a chance.
I saw where you recently experienced some health issues and wanted to let you know about Anatabloc. It is classified as a food supplement and has been shown to have very strong Anti-inflammatory properties, better even than prescription anti-inflammatory products. In a recent study of smokers, it reduced C-Reactive Protein (CRP) levels by 30%.
The kicker is that the active ingredient, anatabine, is found in small quatities in tobacco! The company is Star Scientific, the same company that is in court with RJR over Star's patented process to cure tobacco with low TSNAs. The Court of Appeals and the Patent Office have both now confirmed the validity of Star's patents.
After reading some of your articles, I thought you might find the Star story very interesting. It certainly deserves a good article by someone. I also thought that Anatabloc might help you with some of your health issues. Best of luck!

Old Rambler, so good to read your inherently sensible ramblings again. It sounds like you've been There and Back*.

As a fellow guitarist and smoker might I add admiringly that your writing style is a lot like a smooth and comfortable Guy Clark song.

You really make it seem so easy with your presentation but I find this topic to be really something which I think I would never understand. It seems too complicated and extremely broad for me. I am looking forward for your next post, I’ll try to get the hang of it!
Beijing Olympic Game Volleyball