Return of The Old Rambler 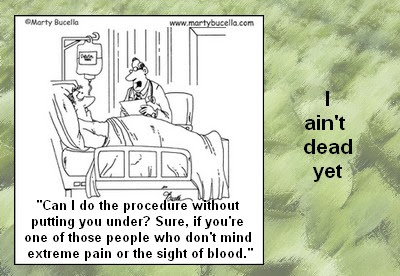 I guess it’s about time I gave readers of this blog (at least those who haven’t deserted me) an explanation for my lengthy absence and the lack of a timely response to their e-mails; 386 unanswered e-mails in one account and 522 in the other.

The simple truth is that I’ve had neither the energy nor the inclination to sit down at my computer long enough to even check my email accounts, let alone post to my blog. A lengthy hospitalization (over three months) can be both debilitating and depressing.

Obviously, rumours of my death have been greatly exaggerated, although it was ‘touch and go’ for awhile. Nor have I been soaking up the sun on some remote island in the South Pacific. In fact, a vacation on some snow covered island in the frozen reaches of the far north would have been preferable to where I did spend the summer and a good part of the fall. Hospitals are no place for rest and relaxation.

I knew I was in deep shit when I woke up back in June with some sweet young thing asking me if I knew my name or where I was. I answered, in a barely audible whisper, “Huh?”

“Do you know where you are?” she persisted.

I did the Socrates routine and answered her question with one of my own. “How in fuck does a guy get run over by a truck in the middle of an operating room?” Her raised eyebrow suggested she was in no mood for humour. So I told her who I was even though I suspected she already knew. I was in no position to be combative.

Bypass surgery is fairly commonplace these days; some might be tempted to say routine. But it does come with some considerable risk attached. The surgery itself went well, or so I’m told. It was an infection, a touch of pneumonia and fluid on the lungs which kept me in the intensive care unit for five weeks. I’m still trying to figure out how you get an infection, especially a contagious one, in such a sterile environment.

At any rate, I spent five weeks with nothing to eat or drink that wasn’t pumped through a tube. And weeks after that eating solid foods pureed to the point of liquidity and drinking fruit juice thickened to the point where you had to drink it with a spoon. Did you know that they can even thicken water?

But I’m not going to spend a lot of time crying in my beer. I was sick. And, thanks to some very capable and dedicated medical professionals, I’m now on the road to recovery.

The cardiac surgeon seems happy with the outcome and I’m happy I’m still on the green side of the grass. Even the nurse I overheard confide to a colleague, “He’s not going to make it,” seemed pleased to be wrong. And it will come as no surprise that I’m as pleased as a pig in shit that she was. Wrong that is.

It has not been a pleasant experience. And, it’s taken a toll both physically and mentally. But it’s time to shake off the lethargy and get on with the business of living. And that includes making regular posts to this blog.

I’ll be out of town over the holidays, spending time with my kids and grandkids. But, hopefully, I should be able to start making regular posts in the New Year.

Until then, I’d like to wish everyone a Merry Christmas and the best of luck in the New Year.
Posted by The Old Rambler at 1:35 PM

I'm so happy to know you're doing better.
It's good seeing your blog show up again.

Nice to hear you have got over the worst and back in fighting mood.

Best wishes over the festive season and have a happy, prosperous and healthy new year.

Good to see you back.

Looking forward to reading more of your posts and wishing you a happy and healthy New Year.

Excellent post.I want to thank you for this informative read, I really appreciate sharing this great post. Keep up your work.