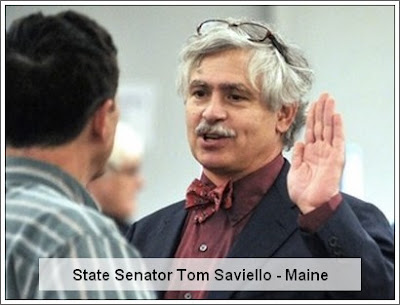 In their capacity as the new whipping boys (and girls) for everything wrong with the western world, smokers, this time in Maine, may soon be faced with yet another egregious assault on their health (and personal autonomy) by their elected representatives. And, this time smokers may literally face a life or death ultimatum; either conform to the demands of anti-smoker zealots and quit smoking or be denied medical care through the state medicaid program. Uh-huh.

Newly elected State Senator, Thomas Saviello said Friday he decided to introduce a bill to keep people receiving MaineCare from receiving benefits at the suggestion of a constituent who works in a rural health care clinic. Saviello says the unidentified female constituent is “troubled when she sees MaineCare patients who have respiratory problems and smoke heavily, because taxpayers are subsidizing treatment for illnesses that could be avoided.”

MaineCare is the state’s name for Medicaid. Funded by both state and federal money, it provides free medical and dental care to low-income residents. In 2009, it was estimated that approximately 270,000 Maine citizens were enrolled in the program, which has an annual operating budget of roughly $2.4 billion. Most of the funding is provided by the federal government, with Maine taxpayers paying roughly $1 billion.

By definition, those on the medicaid program are among the most financially disadvantaged residents in the state. Refusing MaineCare benefits to smokers could effectively deprive them of medical care in potentially life threatening situations. Is Saviello seriously proposing to jeopardize the lives of Maine residents, who obviously can't afford private health care, simply because they smoke?

In an AP article by Glenn Adams, and carried by several newspapers in Maine, Saviello claims he's "not out to punish smokers or tell them how to live their lives." Huh?

How can this deranged proposal be construed as anything but punishment for failing to conform to lifestyle behaviour deemed appropriate by anti-smoker zealots? Does the Senator realize that smoking is still a legal activity? That his plan would penalize the most vulnerable in the population for engaging in a legal activity? I wonder how many smokers voted for this morally bankrupt idiot?

This is the most cowardly, and callous, assault on smokers since Jane DeVille Almond, a British nurse and anti-smoker zealot, told a radio audience that smokers should have to quit or be denied medical procedures offered to the non-smoking public under Britain's NHS (National Health Service). When quizzed by the host of the radio program about what should be done if smokers needing heart surgery couldn't afford to pay the medical costs from their own pocket, the nurse responded: “They'll just have to die, then, won't they.”

It's unclear just how much (if any) serious consideration he's actually given to his proposal since the Senator has released no details on the bill he intends to introduce in the State Senate. But, despite the fact that his proposal is meant to reduce the costs associated with smoking related diseases, among smokers at least, Saviello acknowledges that he has no idea how much money might be saved by denying medical treatment to smokers, although he “suspects” it could be pretty significant.

I guess Maine's smokers should be thankful none of his “troubled” constituents suggested herding smokers into boxcars and shipping them off to some isolated re-education camp where they could be experimented on with Chantix and other "smoking cessation" drugs.

Saviello's proposal is just one of several pieces of anti-smoker legislation to be introduced in Maine's new legislative session.

Rep. Les Fossel wants to raise the minimum age to possess tobacco from 18 to 21, in an effort to reduce teen smoking rates. Rep. Anna Blodgett is sponsoring a bill to bar smoking in private clubs such as the Elks and the American Legion, which are apparently exempt from the current smoking ban. The lung association wants legislation to discourage youth smoking; they're lobbying for a $1.50 increase in Maine's cigarette excise tax.

Of course, this is all just idle speculation until (unless) Saviello actually comes up with a bill and introduces it formally in the legislature. So, we'll put a hold on the crucifixion . . . for now.

And, of course, there's always the possibility that the senator might change his mind. He's been known to do that. Saviello served four (two-year) terms in Maine's House of Representatives, first as a Democrat, then an independent, before being elected to the State Senate as a Republican in last November's election.

But, his political affiliation doesn't really make a lot of difference. Whether he's a 'publican, a 'dependent or one of Demuddercats, I suspect he'll still be an anti-smoker bigot.
Posted by The Old Rambler at 2:30 PM

Jane DeVille Almond proclaims herself to be 'an expert in men's health' yet she is only a lowly ex school nurse with a bachelors degree in English(!!!) and her 'expertise' is in obesity (She is a director of the National Obesity Forum and Vice President - so she is only an expert in her own mind on smoking).

Foul self proclaiming busybody and apparent eugenicist sucking hungrily on the public teat. So why does she command any airtime?

If these elected officials want to target smokers for driving up HC costs than so be it. The next group they should challenge are the 59% of Mainers who are either overweight or obese, which causes many more health issues than smokers do. While Maine obesity rates are climbing (from 12% in 1990 to 26% in 2006) ..smoking rates are decreasing. 0.5 billion dollars is spent on obesity related issues every year in Maine {Obesity in Maine; DA Mills} As for the unnamed woman who stated " taxpayers are subsidising treatment for illnesses that could be avoided"..I challenge her to gather data on the number of obese patients she encounters on a daily basis who choose to overeat...if we are going to start evaluating who deserves health care based on lifestyle choices than every group should be looked at..smokers, drinkers, overeaters, extreme sport fanatics, drug abusers,homosexuals...the list could go on and on. The only ones left will be the perfect individuals who make perfect choices...that would certainly limit maine's healthcare costs.

cut mainecare from smoking. Any idea how many mental health consumers smoke to deal with anxiety depression and psychosis. Persons with mental ill health have higher rates of health risk (smoking, obesity, physical inactivity)
Such a law passes and you have cut a good proportion of the mental health population out of services. Im sure that will not be very helpful for a the health system as a whole or the already overburdened mental health supports out there.

there are only so many healthcare resources to go around - smokers choose to smoke and the overweight choose to overeat or make other unhealthy choices. to say they do not have a choice is to say they are incapable of free will. if you choose to smoke or overeat and end up needing to use more than your share of resources, why should that be my problem?

Nonsense. Most objective studies show that smokers impose no greater burden on society than non-smokers.

On a nation wide basis, the combined provincial and federal revenue from sin taxes on tobacco was $7.09 billion in 2005/2006 (excluding provincial sales taxes and goods and services tax). Physicians for a Smokefree Canada estimate nationwide direct health care costs attributed to smoking at only $4.35 billion.

Smokers pay their own way.