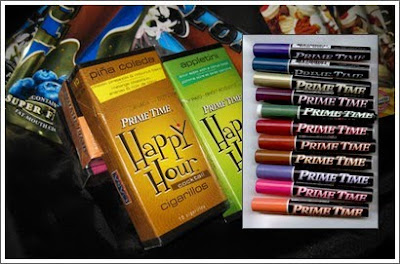 The anti-smoker cartel has been effectively setting public policy on tobacco control for many years. Governments appear to have abdicated responsibility in this regard, content to rubber-stamp whatever legislation the fanatics demand with little or no critical evaluation of the potential social or economic consequences.

The extent of anti-smoker influence on public policy became very clear with the passage of Bill C-32 in Canada's House of Commons earlier this year.

Staff at Health Canada were charged with drafting legislation to fulfill a campaign promise made by Prime Minister Stephen Harper last September. He promised to ban “candy-flavoured” cigarillos allegedly being marketed to children. The legislation, Bill C-32, is called “The Cracking Down on Tobacco Marketing Aimed at Youth Act”. The title itself makes the government's intention pretty clear.

Harper, at the time, flourished colourful packages of candy flavoured cigarillos to emphasize the need for such legislation; a seemingly graphic example of the Prime Minister's intention.

Policymakers at Health Canada, however, had a somewhat different interpretation of what was needed. And, thanks to language used in the bill, it went far beyond anything the government intended. Health Canada appears to have substituted their own more restrictive policy for the the one Harper had promised.

The language used by Health Canada apparently bans all flavoured cigarettes, including such well known American brands as Marlboro, Camel and Winston, as well as some European brands. But, the flavouring used in American cigarettes are not candy flavours meant to entice children; they're flavourings and sweeteners used to make the harsh taste of burley tobacco used in American blend more palatable for adult smokers.

The anti-smoker element at Health Canada acknowledge they were aware of the implications of the language. They argue that it's impossible to ban candy flavoured cigarillos, and not Marlboros. Said Paul Glover, assistant deputy minister of Health, "a product that is easier to smoke and less harsh is easier for youth to start." Uh-huh.

Says Health Canada spokesperson Christelle Legault: “The intent of Bill C-32 is to prohibit the use of flavorings, except menthol, and appealing additives in all cigarettes. We know that the addition of flavours and additives makes them more appealing to youth and this is exactly the kind of tobacco industry marketing tactic that we want to prevent in order to protect our vulnerable youth."

But, it was not the intent of parliament, at least not the publicly stated intent. Harper promised merely to prohibit candy flavoured tobacco products which might encourage young people to experiment with tobacco, not all cigarettes containing any flavouring or additives.

MP's, anxious to appear tough on smoking and perhaps score some cheap brownie points with constituents, passed the anti-smoker legislation with something less than due diligence. They either failed to read Bill C-32 or totally misunderstood its implications. Or, of course, they could have simply misled the public about the legislative intent.

The significance of the wording was not lost on US politicians or trade groups, however, especially those in the tobacco growing regions of the US. They pointed out, quickly and forcibly, that banning American blends of tobacco, but not Canadian varieties, violates NAFTA and sets the stage for a potential trade dispute with Canada's largest trading partner. Protests have been sent to Ottawa and some US politicians have demanded reciprocal action be taken by the US.

And, the chagrined Conservative caucus in Quebec took the unprecedented step of recanting their prior votes, threatening to withdraw support for the legislation unless it's amended. It seems a Rothman’s factory in Quebec City, which produces American brands for the export market, is threatened with closure and the loss of over 300 jobs because of the language ostensibly slipped into the legislation by Health Canada.

Officials at Health Canada claim there was “nothing covert” in their actions, they just wanted to make sure there were no loopholes in the legislation (except for menthol, of course) for those nasty old tobacco companies to squeeze through.

What they fail to acknowledge is that the legislation as written ignores the stated intent of the government. The publicly stated intention was to ban candy flavoured cigarillos which might entice young people to experiment.

Did the anti-smoker zealots at Health Canada attempt an end run around parliamentary authority? Or has the government been lying to the public about their intentions all along?

Luc Martial (of Casa Cubana, a Montreal-based importer of cigar products, including flavoured cigarillos) says the legislation is based “on a premise of fear, not fact – hate, not health.” He points to the lack of any real research on the subject.

Martial, formerly with the Non-Smokers' Rights Association and the Tobacco Control Programme at Health Canada, claims Health Canada conducted “no specific research on the use of flavours in tobacco products; the market for flavoured little cigars/cigarillos and the industry itself.”

In addition, says Martial, “The Government chose not to consult in an honest, meaningful, transparent and open manner with the thousands of legitimate private sector stakeholders whose businesses and jobs will be devastated by Bill C-32.”

He's right. They didn't. Of course, the anti-smoker crowd has never needed evidence to convince the government to pass anti-smoker legislation. And consulting with the business community regarding the economic consequences of anti-smoker laws has never been part of their standard operating procedure.

Bill C-32 was approved by the House of Commons, with little debate and no objection. It is now under scrutiny in the Senate. During Senate hearings, Senator Michel Rivard compared Bill C-32 to “crushing a fly with a bulldozer”. Senator Hugh Segal was prompted to ask witnesses to explain what Health Canada was up to.

The anti-smoker crowd, in turn, claims resistance to the bill comes only from the tobacco industry and politicians in Quebec who are concerned about the possibility of losing a few jobs. And, thanks to a strong lobby effort by the anti-smoker crowd, it appears the Senate will knuckle under and approve the bill.

But, the anti-smoker brigade, and their cheer-leading allies in the press, seem determined to avoid discussing the unethical conduct of those involved. Either the policy makers at Health Canada subverted the parliamentary process by including language that the government never intended; or, the government misled the Canadian public about the intention of the legislation.

A little incident in the grand scheme of things, to be sure. But, those adults who choose to use a legal product, and those who make their living from the legal sales of those products, are being buried under a mountain of bullshit and bafflegab.
Posted by The Old Rambler at 10:14 AM

This business of the "candy flavorings" in cigarettes "attracting young smokers" is absolute nonsense. Young smokers try smoking because it looks like an interesting thing to do, a lot of people evidently like doing it, and because when they try it they get sort of a neat dizzy feeling from it.

When Paul Glover says the tobacco companies want to market cigarettes that are "easier to smoke and less harsh" he's probably telling the truth, and when he notes that such products are probably "easier for youth to start." he's probably at least a little bit correct there too. But aren't cigarettes that are less "harsh" also likely to be less irritating and damaging to regular adult smokers? Would he perhaps recommend cigarettes that produce painful coughing with every puff? Sure, it might kill off a lot of adult smokers, but hey, if you make them bad enough they're pretty sure to discourage new smokers, right?