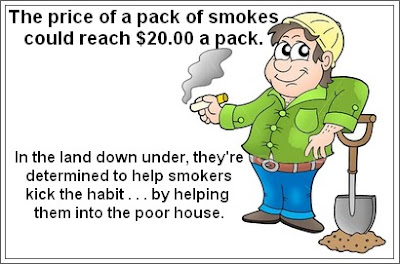 Action on Smoking and Health (ASH, New Zealand) director Ben Youdan is taking aim at a new initiative by British American and Imperial Tobacco to reduce the price of a pack of some of their cigarette brands. Says Youdan: "It's well documented that increasing the price of cigarettes was one of the best things you can do in terms of reducing use and therefore improving health."

ASH, along with other anti-smoker groups, is concerned that price cuts of up to a buck a pack by tobacco companies will make smoking more affordable and lure former smokers back to the habit. But, even worse in the eyes of Youdan, they're reducing prices on cigarette brands that are smoked by those on the lowest incomes. “They're not taking premium brands and making them cheaper," said Youdan.

And, of course, the reduced prices are viewed as detrimental to the health of the kids. After all, if poor people can afford to buy smokes, then the kids might be able to buy them too. “Price plays a very important role in reducing tobacco use, particularly among young people who are the most price-sensitive group in the population. The higher the price, the less people smoke," said a health ministry spokesmen. Uh-huh.

I wonder how much the price would have to increase to force smokers in the higher income brackets to give up the habit?

It's disheartening to see how truly vindictive these anti-smoker cultists can be; vindictive and myopic. If they would just take off the blinders, they might see that a policy of high tobacco prices, especially when it's accomplished through punitive levels of taxation, actually becomes counter-productive.

Of course, it's possible that they don't have the same problem with contraband in New Zealand as they do here in Canada. But, I doubt it.

As taxation rises to confiscatory levels, the potential for profit in the black market economy grows exponentially. Sales of legal tobacco product may go down, but the sales of contraband go up accordingly. And, that usually means that the kids they're allegedly trying to protect from the perils of smoking will be able to get smokes easier and cheaper from the bootleggers who have no qualms about providing cheap black market smokes to underage young people.

And, the latest news from Australia, is that the government there is poised to double the taxes on cigarettes.

ASH (Australia) chief executive Anne Jones, spouts the usual anti-smoker rhetoric claiming that a tax increase will reduce consumption by four per cent for every 10 per cent increase in price. And, of course, it would also reduce the number of children taking up the habit. Says Jones: "We're right behind the recommendations for doubling the price to $20 (a packet) and using that revenue to then drive down smoking rates."

Of course, when she says “using that revenue to then drive down smoking rates”, she means providing funding for the Holy Church of the Anti-Smoker, of which her group is an esteemed member of the congregation. And, it should be pointed out that the increase would raise an estimated $1.97 billion a year for government coffers; at least, theoretically.

But, the politicians should give the issue some serious second thought.

Here in the Great White North, with the highest levels of tobacco taxation in North America, the ever-increasing price of cigarettes has created a well entrenched and formidable black market. As a result, governments have actually seen tax revenue decline by billions of dollars.

In Ontario and Quebec, Canada's most heavily populated provinces, it's estimated that over 40% of cigarettes sales are contraband.

But the effects of usurious levels of tobacco taxation reach far beyond the decline in tax revenue.

For example, convenience stores, which rely on tobacco sales for 30% to 70% of their revenue, also suffer adverse economic consequences. And, it's not just tobacco revenue they lose. Smokers buying cigarettes from the trunk of a car also spend less on impulse items, confectioneries, soft drinks, etc., because they're no longer making regular visits to the local corner store to pick up their fags.

And, actions taken by the anti-smoker crowd to limit the availability of tobacco products to minors are also compromised. Individuals selling cut-rate smokes from the trunk of a car are unlikely to ask for ID. So, increases in tobacco tax are likely to have a detrimental affect on youth smoking rates.

In addition, there's the added cost of policing contraband activity.

The effects of a public heath policy which relies on penalizing adult smokers for engaging in a legal activity are becoming glaringly obvious. And, the prevarication that anti-smoker efforts to punish smokers with vindictive smoking bans and punitive taxes is “for the good of the kids” is wearing a little thin.

Also wearing thin are most of the other lies being touted by the anti-smoker cult. For instance, an Australian Health group, Quit, says increasing the cost of smokes will save thousands of lives. And, Quit policy manager, Kylie Lindorff, makes the audacious claim that 60 per cent of smokers supported jacking up prices. Uh-huh.

Can't you just hear the victims of the Inquitition demanding of their tormentors: “Turn the screws up a notch, it'll help me confess my indiscretions.” If 60% of Australian smokers feel that guilty about their habit, they should simply quit. Tens of millions worldwide have done just that, without the need of NRT (Nicotine Replacement Therapy).

What's really amazing is the number of people, including smokers, willing to buy into the bullshit and bafflegab.

ASH (Australia) chief executive Anne Jones, spouts the usual anti-smoker rhetoric claiming that a tax increase will reduce consumption by four per cent for every 10 per cent increase in price.

This must come directly from the international smokercontrol bible. They are spouting the exact same line here in NB in the hopes of lining their pockets as well.

"We need to look at price. The plain truth is New Brunswick has now, in Atlantic Canada, the cheapest cigarettes," said Ellen Snider of the provincial branch of the Canadian Cancer Society. "It's estimated that when you increase tobacco prices by taxation by about 10 per cent, you get a corresponding decrease in smoking rates of four per cent."

Another thing I find rather hilarious. They claim that raising taxes on tobacco, in and of itself, will decrease the number of smokers, yet they have to make sure they demand their piece of the pie. Why? Wasn't I under the impression that they would be happy to see the number of smokers decline? Wouldn't their job be done?

Tax on cigarettes should be increased "for the purpose of decreasing tobacco use only if a significant portion of resulting revenues are allocated to sustainable tobacco prevention and cessation programs," she said.

What a joke! These antismoker groups are not the ones paying for policing and incarceration of this new breed of criminals known as smokers.

I hope governments start putting these antismokers in their place before they make an even bigger mess than they already have.

Fortunately, according to this article, the NB government does not appear to be in a big hurry to cater to this the antis' latest demand. I hope they stay the course.

It will do well - it did extremely well in Canada where cigarettes are 10$ a pack for a decent brand.

I see almost no smokers around anymore.

But then again I do agree that smoking is a major personal health hazard...

I'm a 28 year old smoker (trying to stop badly) and I have the lung capacity of an (no offense) old man.

Is the anti-smoking campaign annoying? Yes.

Smoking may well be a health hazard. The point is whether punitive tobacco taxes do more harm than good. In Canada, excessive taxation has led to a thriving black market which costs government billions in tax revenue. In addition, the black market makes cheap smokes readily available to minors.

The simple truth is that the anti-smoking campaign has turned into an anti-smoker campaign.

And, if you have the lung capacity of an old man at the age of 28, there are likely other lifestyle behaviours at play, like not getting enough exercise. There are also occupational and environmental factors to consider.