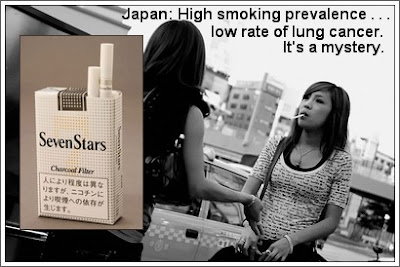 It’s been known for many years that lung cancer among smokers in Japan was significantly less in comparison to smokers in North America. In fact, a 2001 Japanese/American study has shown the relative risk is about 10 times higher in North America than in Japan. And, this is despite the fact that smoking prevalence is much higher in Japan than it is in the US or Canada.

It’s a phenomenon that’s come to be known as the Japanese smoking paradox. And, it’s a circumstance that’s puzzled scientists for decades. It’s also a contradiction of the evidence which the anti-smoker cult would like to ignore.

The very existence of this paradox brings into question the association between smoking and lung cancer. If smoking causes lung cancer, then smokers in Japan should experience the same relative risk as North Americans. They don’t.

And the reason for the difference is unlikely to be genetic. Other studies have shown that Japanese men raised in the US approximate the relative risk of white males. So, what causes the extraordinary difference in lung cancer rates and relative risk between Japan and North America?

All of these may be legitimate reasons for the difference. But, if lower alcohol intake, or lower fat intake are the reasons for the disparity in lung cancer rates, then we’re dealing with three separate risk factors. And, North American men should be strongly advised to reduce alcohol consumption and alter their diet as well as give up the fags.

Instead, the emphasis is on forcing smokers to quit . . . for their own good, of course. But, if changes in drinking habits and diet can reduce cancer incidence by 90% then concentrating on smoking cessation as a means of preventing lung cancer is disingenuous.

But, the contention that the difference could be attributed to lower levels of carcinogens in Japanese cigarettes, or more efficient filters, is also problematic. This would suggest that less hazardous cigarettes (LHCs) are not only feasible, but already exist. Anti-smokers have opposed the promotion and the development of LHCs in the US for decades.

But, the search for LHCs was dropped circa 1980 in favour of an all out war on smokers when the anti-smoker cabal insisted that smoking (and smokers) could be eradicated. The prohibitionists were concerned that LHCs might tempt some to take up the habit, or diminish the motivation for smokers to quit. Most regard LHCs (at least publicly) as a pipe dream.

But, if the tobacco blends and charcoal filters available in Japan are even partly responsible for the Japanese smoking paradox, then the anti-smoker cartel has done a disservice to smokers around the world. And, they may be complicit in the deaths of millions of smokers who otherwise might have benefited from the introduction of safer tobacco products into the markets of North America and Europe.

The real question is why the risk of smokers getting lung cancer is ten times greater in North America and Western Europe than it is in Japan.

And, the answer may be that in North America the real risk associated with smoking and lung cancer has been grossly exaggerated. Maybe the relative risk of smoking in the US has been inflated to such incredible numbers by simply ignoring or deliberately underestimating the effect of the dozens of other risk factors associated with lung cancer, including alcohol consumption and diet.

The Japanese/American study focused on smoking. But what other lifestyle, occupational and environmental variables exist between the two countries? How much effort has been put into investigating the possibility of LHCs?

Is anybody looking for an answer? Or are they content to simply crucify smokers?
Posted by The Old Rambler at 8:45 AM

Thanks for an excellent column Rambler! :) I'd known of the Japanese/American disparity but had no idea it was so large.

And you're quite correct about the damage that's probably been done by dropping the research into LHCs. If we'd poured half the money into that end of things that's been poured into the antismoking movement we might very well have cigarettes today that have very little impact on health.

Great piece Rambler! I too have been wondering about this subject. When I learned that it's the anti-smoker crusade that is responsible for our lack of access to a safer product I was stunned. Then I got angry. The public at large really needs to know about this. I am convinced that if the public were to become aware of this, there would be a firestorm that would usher in the end of the anti-smoking movement, which of course is why they've buried the science that says that safer cigarettes are possible. They are only concerned with protecting their own interests; this just proves it.

According to their own projected death rates from smoking, millions of smokers would still be alive this very day if it were not for them and their interference in choice, science, and human ingenuity. How many people in this country would become upset upon hearing about this? Someone's mom...or sister...or son..could have been saved. Where is the media on this? If they're looking for a BIG story, this would be it.

Is what most people say. I've always found it quite hypocritical that cigarettes must label (at least here in Canada.) what they may cause, be hidden behind a black counter frame and not allowed to advertise and yet Alcohol although being a carcinogen does not need to warn the user.

What do you see in Alcohol commercials? Fun and hot girls. (implying no risk)

I think Alcohol products should be required by law to add to the label that Alcohol is a known neuro toxin and carcinogen.

But the Government owns the booze - and that's never going to happen to their baby.

Hey, Old Rambler and OR supporters!

While I appreciate your advocacy for freedom of choice, some people have an allergy to smoke and don't like being at the mercy of a smoker. Especially, when it's clear the smoker has no intention of trying to quit.

Who justifies smoking these days? Wow!

Can you imagine the world with more drinking water and less cancer-related deaths? And, yes, smoking causes cancer. I don't knowingly put anything in my body that causes cancer. Please stop fueling the tobacco industry.

Save the next generation!

Why am I here anyway? My words are sure to fall on deaf ears. Here's some entertainment for you: http://www.break.com/usercontent/2008/2/Smoking-baby-446077.html
Clearly, this is more your style!

Drink green tea... and have a great day!

I'm impressed, I have to admit. Seldom do I come across a
blog that's equally educative and interesting, and without a doubt, you've hit the nail
on the head. The issue is an issue that too few men and women are speaking intelligently about.
I am very happy I found this during my hunt for
something relating to this.